Positive Reasons for Installing Caterpillar ® C32B engine on a Superyacht

Here at ptw Shipyard in Tarragona, Spain our engineering team were recently tasked with upgrading the engine room on a 40m superyacht.  The yacht had been operating on two Detroit diesel 9163-7301 engines but when our engineering team discussed the project with the yacht owner, captain and engineer, it was agreed that the old engines would be replaced with Caterpillar ® C32B engines.

Dean Díaz, our Head of Engineering here at ptw Shipyard explained that the decision to change to the CAT® engines was based on the number of positive factors that the C32B engines offer over the existing engines.  To begin with, the new engines would result in a reduction in the amount of diesel the yacht would use, making it more efficient on fuel consumption while reducing emissions.  In addition the CAT® engines and auxiliaries are more compact than the old Detroit engines resulting in more space in the engine room and a 40% reduction in overall engine weight.

Like the yacht owner and his crew, we were really impressed by the number of positive improvements provided by the new engines to the superyacht so we asked Dean to talk to us about the latest version of the CAT® C32B engine.  As Dean and his team are all “gearheads”, who really enjoy their jobs because engineering and mechanics are their passion, there was no shortage of detailed information he was happy to share with us about the changes CAT® have made.

In late 2020, he begins, Caterpillar® announced the launch of the C32B, their latest offering to the new marine pleasure craft and rebuilds market.  This vee-configuration, 12 cylinder engine has a 32.1L displacement with a bore and stroke of 145 x 162 mm.  The engine is turbocharged with seawater after cooling and offers 5% more power over its predecessor, and this increase of power comes, he clarifies, with just a minor 2% increase in weight.  The engine is available in three ratings 2000, 2200 and 2400 bhp all rated at 2300 rpm and has a metric rating of 2025hp. 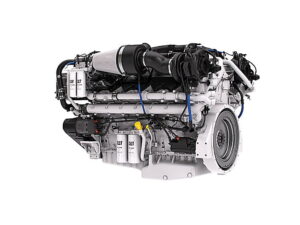 Dean goes on to explain that the core of the C32B engine has been upgraded for increased power density efficiency with an increased compression height on the pistons, and the connecting rods have also been re-designed for more power capability.  The crankshaft has increased in size and strength and CAT® changed the main bearing size.  While upgrading the cylinder block to accommodate the change, he goes on, they have optimized the cylinder heads with an improved water jacket and integrated fuel lines.

As Dean hits his stride with the topic he explains that the fuel system was enhanced with a unit injection fuel system resulting in up to 25% noise reduction at low speeds.  The fuel filtrations system has been upgraded for optimal performance while the charge air system has been upgraded to a three turbo sequential air system allowing control over the sequence of use for the turbo as the engine increases its speed and power.  According to Dean the C32B now runs 3% longer on full throttle than its closest competitor.

CAT® installed a larger after cooling core when upgrading the cooling system as well as a second rubber impeller sea water pump.  This means the engine now has a front and rear sea water pump, a dedicated circuit for the after cooler and one for the jacket water heat exchanger. However Dean points out that it still has just a single inlet and outlet seawater connection and that the seawater system is electrically bonded now, so no more zinc anodes to be replaced.

When it comes to the electronics, he says Caterpillar® upgraded the C32B to the latest CAD ECM technology atom 6 resulting in faster and larger processors.  The engine has the same dimensions as the C32B and maintains the same connection points as well as having the same emissions certification for performance ratings, including EPQ Tier 3 Recreational and IMO II standards.

The reason we recommend Caterpillar® engines to our clients, Dean explains, is that we know from experience that they are highly reliable.  This new model withstood over 30,000 hours of CAT ® testing before being launched.  In addition it is sold with unlimited hour protection for the first two years, 10 year warranty coverage and Caterpillar® Extended Service Coverage (CAT® ESC) is also an option.

Delighted by his opportunity to talk engines Dean heads back to work but before he goes he is eager to tell us that he and his team are always happy to talk about all things engineering.  “We are always available to clients, old and new”, he says, “we are always available, whether it’s for repairs, refits or servicing.  We enjoy the challenge of a refit as much as the satisfaction of a repair or service” he explains.  Clients just need to drop them an email or message and a qualified team member will get back to them at a time that suits the client best.

If you have an upcoming service or refit, then talk to one of our trusted CAT® Marine Power experts today at ptw Shipyard we are an authorized Caterpillar® Sales and Service facility. 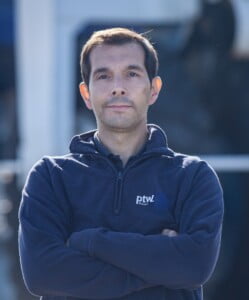 Coatings Specialists: Obtaining the finest results available in the yacht paint industry, here at our shipyard we offer a fully dedicated Yacht Paint in-house department. Our team with over twenty years of experience in the super yacht arena will provide the highest standards reaching your expectations. Superior contractual standards and a constant application and surface controls will certify and warrant each job.

We use cookies to give you the best online experience. Please let us know if you agree to all of these cookies.